天安門事件２４周年 The 24th Anniversary of Tiananmen incident passed on June 4 and we saw 180-different reaction for it between the Chinese Government and Chinese people of democracy uprising outside the country. The former remained silent to our regret and the latter mourned the loss of the lives in the tragic incident backing to 1989. China, where is she headed? China shoud remember that the world would welcome fresh approach from her new Government toward peace and safety of not only her own nation but also her neighboring nations.    by  P. Satow

The article points out that the number of inward-looking students is increasing in Japan and that it is bringing forth further lagging of Japanese society behind overall globalization process. Its background is described as coming from  the regrettable reality of the existing nationwide education system in which students cannot engage themselves in their true studies with international  perspective and  rather exert entire energies into preparation for passing peculiar entrance exams.  In case of the curriculum of English, students are not, therefore, learning communicative English useful in the global environment.

I am of the opinion that the record of achievements made during  three-year school life  should be emphasized or prioritized  and that the existing one-time Center Test system or multiple-choice answer  type tests applied to all the curriculums should be firstly scrapped. Unless the current  education system, entrance exams or the way career paths to bureaucrats could be fundamentally reformed, students would not be able to turn outward-looking and would not develop to human resources serviceable with global views and knowledge of communicative English.       By  K. Minamii 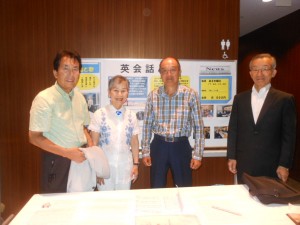